All articles tagged with "Loser"

Goddess Kiffa uses heels to put slave in his place

Goddess Kiffa had a slave who thought he was more than that and she laughed when she realized that he thought they were equal. So she had to put him in his place and she did not hesitate to. The mistress used her high heel boots to dominate as well as humiliate him. As he felt the pain and he was humiliated, he realized that they were not equal and he realized what his place was.

Humiliating the student in class room

This loser – student is now finally doing what he is supposed to do: worshiping the socks and bare feet of this adorable dominant goddess. He should lick, sniff and kiss the feet of his goddess and suck her dirty toes deep into his mouth. Let’s see if this student is finally worth something.

July wants her slave to shut up and there is no better way to keep him quiet than sitting down on his mouth. With her sexy lingerie she does exact this. With this hot butt on his face the slave can neither talk nor breathe very good. But as long as he is quiet - who cares?

This guy lost a card game against Kate and Emma and these girls know how to degrade a loser properly. They pull down their jeans and make him kiss their asses. Emma's wearing only a thong while Kate's wearing green panties - but of course he has to kiss both asses anyway! 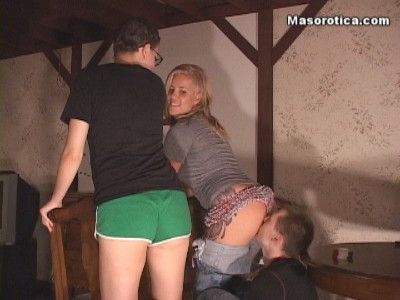